The Freedom Flotilla Coalition met in London over the last two days to discuss future plans in the wake of the terrorist attack on Gaza’s Ark in the port of Gaza, as well as future plans to struggle against the blockade of Gaza.

The attack, which occurred on April 29th, caused substantial damage to the hull of the boat.  These hull damages and others caused by the explosion need a minimum of 2 months work to repair at a cost of approximately US $30,000.  In response to this attack we will increase our efforts to challenge the blockade through non-violent direct action. We now plan to sail Gaza’s Ark early in the fall of 2014.

The authorities have not yet concluded their investigations of the incident, so it is premature to blame anyone, but it is well known who enforces the blockade on Gaza and who doesn’t want it challenged.  Preliminary results of the investigation and inspection by our partners indicate that the materials which were used in the attack are not readily found in Gaza.

Freedom Flotilla boats have been sabotaged before in the ports of Cyprus, Greece and Turkey, over the last 5 years, as they were preparing to sail to Gaza to challenge the blockade.

Boats that sailed to Gaza have been attacked by the Israeli Navy in international water, in one case lethally, and in others with force which caused a boat to sink.  Boats that were not sabotaged (over half a dozen) were hijacked and towed to Ashdod.

This attack on Gaza’s Ark took place as Israel is under increased legal pressure for its deadly attack on the first Freedom Flotilla in 2010 at the International Criminal Court (ICC) and in Turkish courts.  It also happens as Israel is increasing pressure against all Palestinians in retaliation against <a efforts at national reconciliation between the West Bank and Gaza.

The Freedom Flotilla Coalition commits to continue its work against the blockade of Gaza in all ways and by all non-violent means possible, including supporting the May 31st International Freedom Day for Gaza. 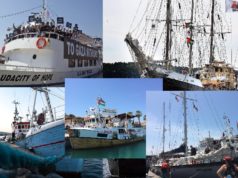 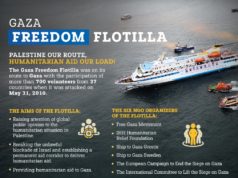 Online Flotilla events during May 2020