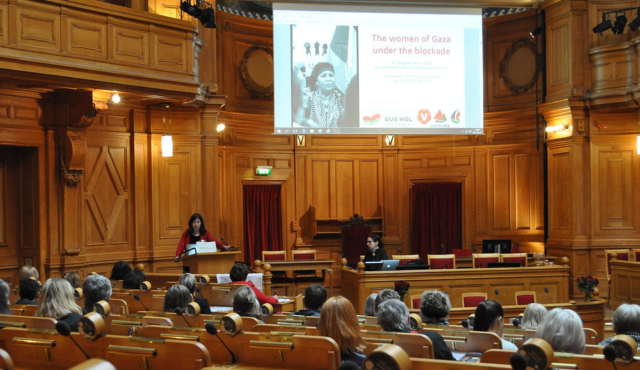 Swedish Parliament Hears from the Women’s Boat to Gaza

Women from five continents who took part in the Women’s Boat to Gaza, travelled to Stockholm to attend the Women of Gaza Under the Blockade” conference and support a resolution at the end of the conference’.

The women supported a resolution calling on the Swedish government, members of the Security Council of the United Nations and governments of all participants in the Women’s Boat to Gaza campaign to take firm and determined actions  to pressure Israel and Egypt to immediately end the blockade of Gaza. It also called for sanctions and the cancellation of commercial agreements and cooperation in fields such as medicine and education.

The 17 May conference at the Swedish Parliament, was organized by Ship to Gaza – Sweden, a member of the Freedom Flotilla Coalition (FFC). The FFC has launched several missions since 2010, using non-violent direct action in solidarity with the Palestinian people blockaded in Gaza. Many of the women who participated in the latest mission to challenge the Gaza blockade accepted the invitation to join the conference.

The conference aimed to raise awareness of the situation in which the two million people of Gaza  are living following a 10 year illegal and inhuman blockade imposed by the state of Israel, with the complicity of Egypt and the international community. This restriction of movement of people and goods by land, sea and air: paralyses the economy; causes poverty and malnutrition amongst the majority of the population; prevents the entry of equipment and medicine, thereby causing deficient medical services and serious health problems; and causes a grave energy crisis producing continuous power cuts. In addition, because Israel has destroyed Gaza’s sewage treatment plant, and because Gaza no longer has the capacity to generate electricity, aquifers are polluted and the environment has been damaged in many ways. This long list of human rights violations collectively punishes the entire population, a violation of international law.. In its 2012 Report, the United Nations Relief and Works Agency (UNRWA) warned that unless these conditions change the Gaza Strip will be uninhabitable by 2020. As if all this is not bad enough, during the last decade the Israeli Occupation Forces launched four major military operations, which in addition to the almost daily attacks on fishers, farmers and the civilian population in general, have resulted in almost 5,000 Palestinian people being killed.

Present at the conference were Hala Husni Fariz Odeh, the Palestinian ambassador in Sweden along with various political representatives who participated in, and supported the Women’s Boat to Gaza. The Chair of the Left Party Jonas Sjöstedt, welcomed the Women Boat to Gaza delegation and the other participants. Samar Awadullah, a consultant at the Negotiation Department and communication advisor of the PLO was one of the speakers. The representative of the Swedish Social Democratic Party in the European Parliament, Eva-Lena Jansson, gave an overview of the humanitarian situation in the Gaza Strip.

Other speakers included women representatives of the Freedom Flotilla:

Dr. Victoria Strand, who took part in the 2010 mission, focused on the serious health problems suffered by the women in Gaza. The veteran voices of Nobel Peace Prize laureate, Mairead Maguire and retired US army colonel and diplomat Ann Wright, moved the public by describing the actions of the Gaza Flotillas as a peace process and insisting on the need to lift the illegal blockade. Several other women who sailed on the Zaytouna-Oliva on its final leg and were intercepted by the Israeli Occupation Forces Navy on October 5th, 35 nautical miles off the shore of Gaza in international waters, and then taken against their will to Israel where they were jailed and then deported, also travelled to the conference. Leigh-Ann Naidoo (South Africa), Dr. Fauziah Hasan (Malaysia), Emma Ringqvist and Jeannette Escanilla, (Sweden), and Sandra Barrilaro (Spain) responded to questions relating to human rights of the women of Gaza and the possible steps that can be taken by civil society as well as by our governments in order to put an end to the blockade. Other WBG participants in attendance included Jaldía Abubakra (Spain/Palestine), Maité Mompó (Spain), Yudit Ilany (Israel), Ellen Hutu Hansson (Sweden), and Gerd von der Lippe (Norway). Their message was that actions such as the Freedom Flotilla must be initiated by civil society in the face of the passivity of the international community: “We women had to sail because our governments do nothing.”

At the press conference after the conference concluded, Ann Wright presented the new project of the Freedom Flotilla Coalition: ‘Solidarity with Gaza Fishers’. She spoke of the need to stand not only with the fishers of Gaza but also with the Palestinian prisoners in Israeli jails who at that time had been on a hunger strike for over a month, as they demand liberty and dignity.

The conference adopted the following resolution:

Ship to Gaza Sweden Conference May 17, 2017
“The women in Gaza under the blockade”
Swedish Parliament in Stockholm

Ship to Gaza Sweden, participants of Women´s Boat to Gaza 2016 and conference delegates

The Israeli blockade of Gaza has now lasted for more than ten years. Almost two million people are living in what can be described as a gigantic outdoor prison. The siege deprives the Palestinians in Gaza their freedom to travel and their access to education, medical care, clean water, food security and economic opportunities.

For ten years the blockade has reduced export of agricultural products to a small fraction of previous trade. Import of building materials, so necessary for repairing what has been destroyed by Israeli war, medicines, foodstuff and other necessities do by no means meet basic needs. The blockade of Gaza is considered a collective punishment of civilians, which means that human rights are abused in violation of international law.

The situation in Gaza is becoming increasingly unsustainable and explosive. Different UN-associations, international rescue organisations, human rights groups and governments in many different countries have repeatedly demanded that the blockade must end. Yet it continues!

Given the UN estimates that in just another three years the territory will be uninhabitable – because of pressure on space, food production and provision of water – a solution to this man-made crisis has never been more urgent.

It is well known that the situation for women is particularly difficult in conflict areas. They have the responsibility for taking care of severely traumatised children while they struggle with difficulties caused by lack of clean water, electricity repeatedly cut off and their homes bombed to pieces. The Israeli blockade and oppression also prevents the women of Gaza to free themselves from the patriarchal structures.

We believe that the international community has a critical role to play in ensuring the welfare of the Palestinians in Gaza. All human beings deserve homes, schools, health care and opportunities – currently we are collectively denying these rights by our inaction.

We urge the Swedish government, present member of the Security Council of UN, and the governments of all the representatives of the participants of Women’s Boat to Gaza to take firm and resolute actions in order to pressure Israel and Egypt to end the blockade of Gaza. There is absolutely no time to lose.

Condemnations of this catastrophic policy must be backed up by conditional sanctions such as cancelled trade agreements and cancelled cooperation in such fields as medicine and education.