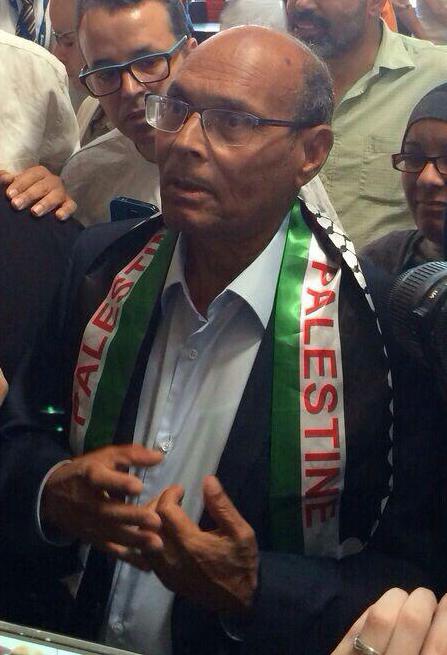 It was at the end of March when members of Freedom Flotilla Coalition had the chance to meet Dr. Moncef Marzouki just after the World Social Forum in Tunis. The meeting only lasted for a few minutes, however Dr. Marzouki’s response to the question “whether he would like to help FF3 and maybe join our flotilla as a sailor” was immediate and clear: “I will be on board Freedom Flotilla 3”.

Three months later Dr. Moncef Marzouki did what was agreed during the FFC meeting in Tunis. He arrived in Greece and boarded on the “Marianne of Gothenborg” to carry himself, together with the rest the sailors in all 4 boats of Freedom Flotilla III mission, the message of solidarity and hope to Gaza and to all Palestinians.

Just a few hours after his return, Dr. Marzouki was asked four questions by FFC media team about his participation, what happened on board and about the Palestinian people:

Q1: What happened after the “Marianne” lost contact with the rest of the world until the time you left Israel?

– It was 1:15 a.m. (Palestine time) when we lost the [satellite] connection, then we saw three military ships, which identified themselves as Israeli naval forces, they then tried to seize control over the ship, the Israeli soldiers easily boarded on the Marianne, and they immediately separated me and MK Ghattas from the rest of the activists on the ship.

– Afterwards, they launched a crazy and harsh inspection process that lasted for hours, they confiscated all electronic devices, including cameras and all means of communication.

– The Israeli Navy was trying to repair the ship until 7:00 a.m. After the repair was done, we sailed under the hot sun to the port of Ashdod.

We got closer to the port at 6:00 p.m. However they decided to stay away from the port and wait until it got dark to cover up their crime and reduce the presence of the media. Therefore, we reached the port at 9:00 in the evening.

–  At the port of Ashdod, I was separated from MK Ghattas. Some officers sat with me and told me that I and the other activists have lost our way by sailing to Gaza, they claimed that there is no blockade on Gaza, and Israel allows into Gaza everything the people need, and so there is no need for these vessels to sail under the name of breaking the siege.

I replied that the people of Gaza deserve to live in dignity, their needs are not only to eat or drink, but to be in control of their own land and borders and to move freely.

– Four hours after our arrival to Ashdod port, I was transported to the airport, and at my request, I traveled to France.

Q2: Could you give a comment regarding your participation at Freedom Flotilla III ?

– I learned a lot during this voyage, It was a very difficult trip as the boat was too small and not prepared for such a long journey. However, every minute I was in the sea I was reminding myself of the steadfastness of the Palestinian children and people who are suffering under the siege from much more harder conditions than we faced on board the ship.

Q3: What is your message to the Palestinians of Gaza after the attack of the Israeli Navy on the flotilla?

– My message to the Palestinian people in Gaza is that we thank you for the noble values you show under the siege, and that by this contribution we only tried to demonstrate a little of your strength and courage.

– We will continue to work for the freedom of Gaza’s residents, and we will sail again and again tirelessly until the blockade is lifted, and the crossings are opened, and the reconstruction process effectively begins on the ground.

– I wish I had reached Gaza and broken my fast together with a Palestinian family in a poor refugee camp or in front of a ruined house.

Q4: How should the international community respond to these acts of piracy and the continuation of the siege by Israel?

– Here, we should distinguish between two levels of the international community:

– Civil society: This level became more aware of the truth and no longer believes only the Israeli version of the story. This community of people in solidarity with Palestine is expanding as the people are refusing to do anything but to act in favor of the values they were raised on. Through our treatment with those activists we felt their anger and challenge against everything that is unfair caused by the ongoing siege.  These communities became more aware of the Palestinian question due to the great steadfastness of the Palestinian society and their sacrifices.

– The official level: this level is deaf and mute in regard of anything that is a right of the Palestinian people. It handles by double standards and measures the situation by different yardsticks.

At the end, the international community, the Arab League and the Organization of Islamic Cooperation organization are all called upon to stand up to their responsibilities.