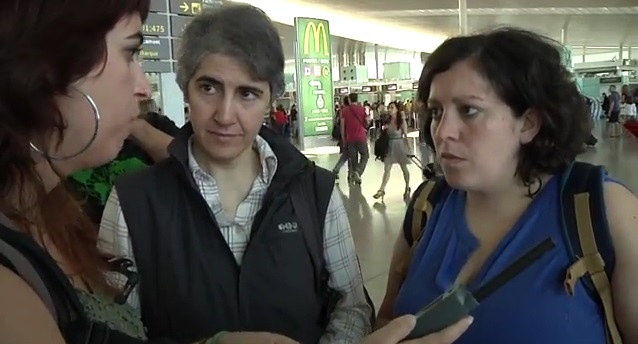 The benedictian nun Teresa Forcades was deported from Israel on Saturday January 23, 2016 as she tried to enter the country. The reason for her trip was a two week teaching commitment she had at the Faculty of Teology at the Dormition Abby in East Jerusalem about the Holy Trinity. Montserrat Viñas, the emerita abbess of the Sant Benet de Montserrat monestery, Forcades travel companion, was allowed to enter Israel after being interogated. Forcades was sent back to Spain after her registration and interogation, but not before passing the night of Friday January 22 at the Tel Aviv airport detention facility.

In a statement given to the press, close contacts of Teresa’s said that she was not given an explanation neither by immigration officers nor by secuity personnal as to the reasons she was not allowed to enter Israel, but informed that her presence there was considered ‘dangerous’. During the interogation she was asked about her participation in the Freedom Flotilla, which sailed towards Gaza last June to challenge the decade long siege imposed on this territory. The Israeli navy attacked the vessel in international waters before it could reach Gaza.

Emanuel Nachshon spokesperson of Israel’s ministry of foreign affairs, confirmed: “We are a sovereign state, and like any other, Spain included, can decide who enters our territory and who doesn’t. In principle participants of the Flotillas have no access [to Israel]” in a statement give to EFE agency and published in various Spanish media. This is not an isolated case, but part of an Israeli policy. Another participant in the Third Freedom Flotilla, Martin Lejeune, a German free lance journalist, suffered the same treatment in December 2015.

The fact Teresa Forcades, Martin Lejeune and others who support the Palestinian cause are prohibited entry by Israel, which controls all access the occupied Palestinian Territories, shows the importance of non-violent international campaigns such as the Freedom Flotilla and proves them even more necessary.

The Freedom Flotilla Coalition will continue organizing and participating in internacional actions supporting the Palestinian people. Teresa Forcades and Martin Lejeune’ examplary solidarity and that of many others will be followed by many. We will keep protesting against the occupation of Palestine and the Gaza blockade. Our demands that Israel abides by international law and respects the human rights of the Palestinians will not be silenced, just as those voiced against our own governments complicity by not putting an end to these policies of the State of Israel.

The Freedom Flotilla Coaliton will not stop until the blockade is lifted, as we announced last summer, we will sail again. The next mission Women’s Boat to Gaza, will include at least one boat of women from all over the world. With this action we highlight the contribution of Palestinian women to their people’s struggle.