Freedom Flotilla Coalition has launched the “Women’s Boat to Gaza” project: a boat, led by a female crew, is going to challenge the Israeli army blockade of the Gaza Strip. 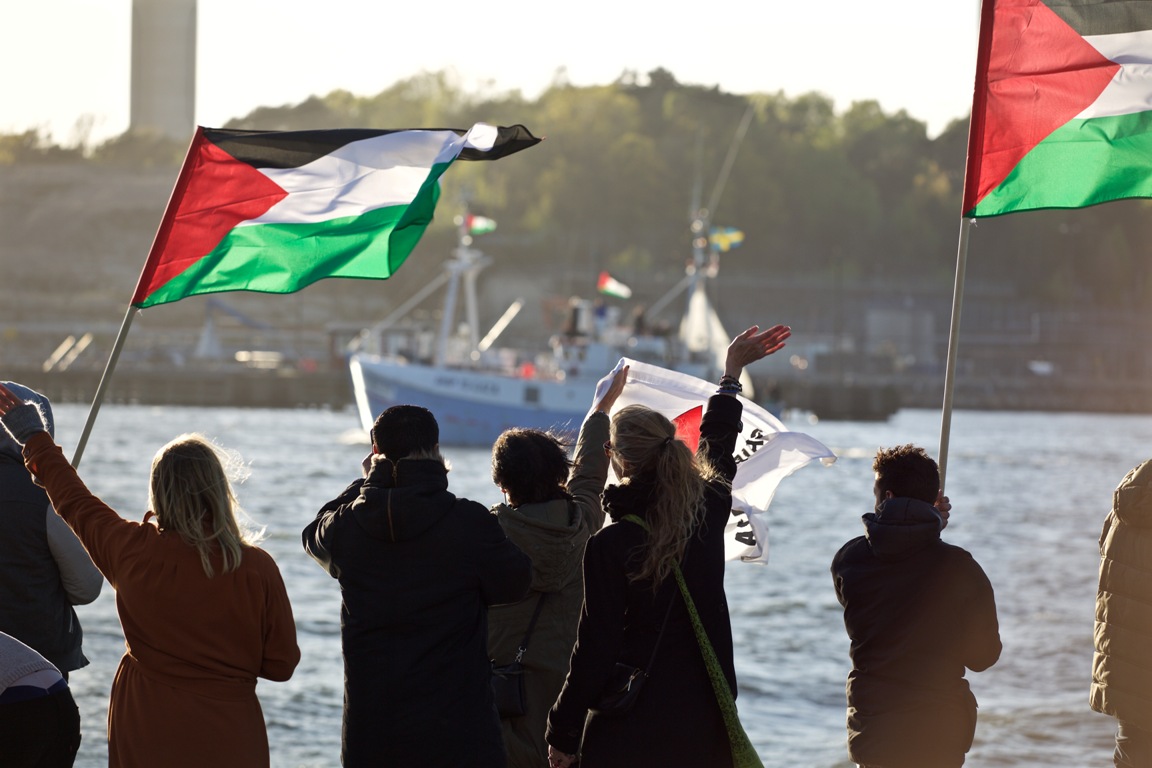 Mantova, 30th of January 2016, Nena News – Why do men make war? Maybe it’s necessary to focus more on the word “men” than on the term “war” in order to answer this radical question, that moreover has inspired a well-known book of the philosopher Bertrand Russell. In the sense that, probably, war is “guy stuff”, it’s caused by the male logic of violence, abuse of power and bullying, it is especially fought by men, except the famous and heroic Kurdish female fighters, who struggle against Islamic State together with their male colleagues, and women who decide to join the army in some Western countries and who, however, are a minority.

Freedom Flotilla Coalition, an international movement promoting actions aimed to end the siege of Gaza, has launched the “Women’s Boat to Gaza” project, in order to attract international community’s attention on the dramatic condition of Palestinian people. A boat, led by a female crew, is going to challenge the Israeli army blockade of the Gaza Strip.

Female activists want to break the military siege, show solidarity for Palestinian people and, in particular, for women whose role is central in the struggle for independence from Israeli military occupation. Nena News has interviewed Wendy Goldsmith, Freedom Flotilla activist, in order to explain the “Women’s Boat to Gaza” project.

Wendy, what is your role in “Women’s Boat to Gaza” organization?

I am one of many people across the world and within our international coalition who are working to end the illegal blockade of Gaza. I am a member of the International Media Committee and I am also a member of the Canadian Boat to Gaza Steering Committee. Our members come from all walks of civil society for a common goal, which is, by sea, to break the siege of Gaza.

Can you describe the “Women’s Boat to Gaza” project?

“Women’s Boat to Gaza” is a project of the Freedom Flotilla Coalition. By launching a women’s boat, women from all over the world aim to highlight the undeniable contributions and indomitable spirit of Palestinian women who have been central within the Palestinian struggle in Gaza, the West Bank, inside the Green Line and in the diaspora. The Women’s Boat to Gaza (WBG) seeks not only to challenge the Israeli blockade but also to show solidarity and bring a message of hope to the Palestinian people, with the support of women, men, non-governmental organizations, civil society groups and women’s collectives and events around the world.

Well, as we know, women play an integral role in every culture across humanity, and also play a significant role during times of abuse and trauma. Women, who make up more than half the world’s population, are the mothers, the caregivers and the sustainers of life and so it is critical for their voices to be heard especially during times of injustice. Palestinian women in particular have struggled and suffered in the face of injustice to keep their families together, to mourn their losses, and to rebuild a sense of hope and power. Indeed, it is women who strive to maintain a sense of security and balance for their children and their loved ones. This is especially evident in Gaza, but also across the Palestinian diaspora.

Palestinians living in Gaza are always in emergency conditions.

Despite the bombs, ruins, power outages and loss of drinking water, despite the forced confinement and harassment by one of the most powerful armies in the world, the people of Gaza are determined to live. Among the rubble of demolished houses, women in Gaza gather the remains of household goods, a broken stool, a dented pan, sometimes a bottle or a school notebook… and rebuild it -they know how to rebuild because they have had to learn. They bake bread and rice every day and console their children when they cry every night because they fear the planes will return. Gaza women are bastions of resistance and life. They do not allow their spirits to be destroyed, in spite of ongoing devastation. Therefore, women from different countries are joining together to reach the women of Gaza, to express our solidarity with the besieged population and bring our embrace as a tribute to the courage and strength of women, our sisters, in Gaza.

Well, freedom is a relative word. Are they free to travel inside and outside of Gaza? No. Are they free to live a life without the threat of Israeli military occupation and physical threat? No. Are their children free to attend school without the fear of being attacked, physically and verbally? No. Are women free to live a life filled with the pleasures and joys of ‘normalcy’? No they are not. Unless and until this brutal occupation ends, no Palestinian will be free.

For 9 years, more than one million eight hundred thousand people have been subject to the cruel and inhuman Israeli army siege, locked in an area of no more than 360 square kilometers, where the Israeli army comes and goes as it pleases: Israeli soldiers fire from their watchtowers against farmers who have had the misfortune of their land being too close to the border area. Israeli navy ships fire at fishermen that are trying to fish in areas where fishing is something which is now forbidden. Periodically, Apache helicopters from the Israeli army carry out incursions called “targeted killings” but never really targeted. And from time to time the government of Israel decides to launch a devastating offensive sowing death and destruction in the martyred Gaza Strip.

Gaza has been flattened during the massive bombing of summer 2014.

Despite promises made by the International Community after the atrocious operation in 2014, very little has been rebuilt. The Israeli army doesn’t allow building material to enter Gaza, there are only about six hours a day of electricity supply and the unemployment rate has risen to 42%. According to UN reports 400,000 Gaza children need psychological assistance. A UN report warns, if not remedied, within five years, Gaza will be uninhabitable.

Is the boat going to challenge the Israeli blockade? Is it risky?

Yes the boat will challenge the illegal blockade and yes, with every challenge there is a risk. We feel that the risk of doing nothing is far greater than the risk of doing something. As a non-violent peaceful project, we are willing to take this risk.
For Palestinians living in Gaza, every day is a risky day. In a normal situation we have not to take risks to show our solidarity but, in Palestine, Israel creates the risk. We are determined to express our solidarity with the besieged population of Gaza because the crime of the blockade is being perpetrated against the people of Gaza for nine years. It would not be possible without the silence, passivity and complicity of many governments that call themselves democratic. We do not want to be complicit in this crime and so for that reason, we will once again sail to Gaza.

When is the boat going to sail?

The exact date of sailing is not yet determined but we expect to make an announcement on International Women’s Day, March 8th.

Are there both women and men in the crew and in the project organization?

There are both women and men involved in the organizing of this project. We are members of civil society with many years of collective knowledge and wisdom working with our sisters and brothers in Palestine and within our respective countries. Our list of current members can be found at www.freedomflotilla.org. Upon sailing, the crew and delegates on board will be only women, in order to highlight and bring attention to the ongoing struggle faced by Palestinian women, and to show the world that the women of the world sail in support of this struggle.

Where are the delegates from?

Our delegates will be chosen from around the world and will include politicians, notable public, activists and organizers.

What is the “Women’s Boat to Gaza” name?

We do not have a name for the boat yet. We will decide this in the coming months and it will be based on a process of consultation. Like our logo, we hope we will find a name that best describes the role of women living in Gaza in their struggle.

From which port is the boat going to sail?

We do not know yet where the boat will sail from, but it will make many stops on its way to Gaza, and will coordinate with women’s groups and solidarity actions. With women around the world, and at each port, we will organize with local groups to bring awareness about the issues in Gaza and about our project.

You have decided to select a logo design for “Women’s Boat to Gaza”.

We have opened the competition to everyone, and the chosen design will be announced at the end of January. We have asked for submissions from across the world, and so far are receiving an excellent response.

Which are your criterions to choose the logo?

The logo must be scalable, clear and appealing whether it is reduced to a thumbnail or painted on the hull of a boat. It should convey the ideas of Palestine, Gaza, women and empowerment. Nena News