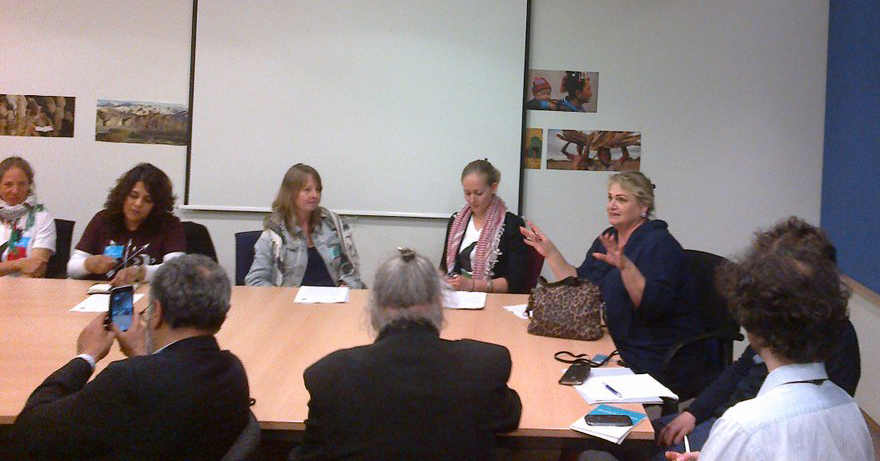 The Women’s Boat to Gaza, a campaign of the Freedom Flotilla Coalition conducted its meetings over the past weekend to discuss and further plans to set sail towards Gaza in mid-September with all women delegates and crew. In doing so we raise the issue of the ongoing illegal blockade of Gaza. Shabnam Mayet, Human Rights Advocate of South Africa says, “The Israeli occupation consistently both violates International Law and disregards UN Resolutions with impunity.”

Confirmed delegates who will be on the Flotilla include; Nobel Laureate (1976) and peace activist from Northern Ireland, Mairead Maguire and Green Party New Zealand Member of Parliament Marama Davidson. Further delegates will be announced in the coming weeks.
One of the important goals of our mission is to highlight the devastating effects of the brutal blockade on the Palestinian people living in Gaza. We will emphasize in particular the struggle of women, and their many roles within the resistance.  Women in Gaza often fill the role of caring for and sustaining life, they are actively involved in community development and nation building. It is important to make their voices heard, even more so during periods of extreme injustice.

We also wish to acknowledge the anniversary of the massacre on the Mavi Marmara in 2010, when 10 non-violent activists were murdered by the Israeli Navy, an illegal act in international waters that continues to go unpunished.  However,  this brutal attack is nothing compared to the daily violence inflicted on Gaza with while the world remains silent.

A United Nations report states that Gaza will be uninhabitable by 2020. Homes, schools and hospitals have been destroyed. 97% of water is not drinkable and electricity is reduced to a few hours per day.   “Our project, supported by many women’s groups in Gaza and by civil society around the world, seeks to bring a message of solidarity and hope. In order to change this horrifying prediction the siege must be immediately lifted” says Ellen Huttu Hansson, spokesperson for Ship to Gaza Sweden.

The Freedom Flotilla Coalition has asked for the support of members of the European Parliament for the Women’s Boat to Gaza and will seek assurances from all governments that they will protect and not obstruct its peaceful mission of solidarity to the besieged Palestinian people of Gaza.